1936. Le Havre. Jeannot meets Léon, a young adolescent who mistakes him for a vacationer. But Jeannot is not on a vacation, he has just returned to France after 65 years of touring the world. Léon reminds him of the enthusiastic Parisian boy he once was, so he tells him about the battles he fought in 1871 during the Commune, and then his quest for a perfect world. Even if he never found the better world he dreamed of, Jeannot continues to hope for it with all his remaining strength. 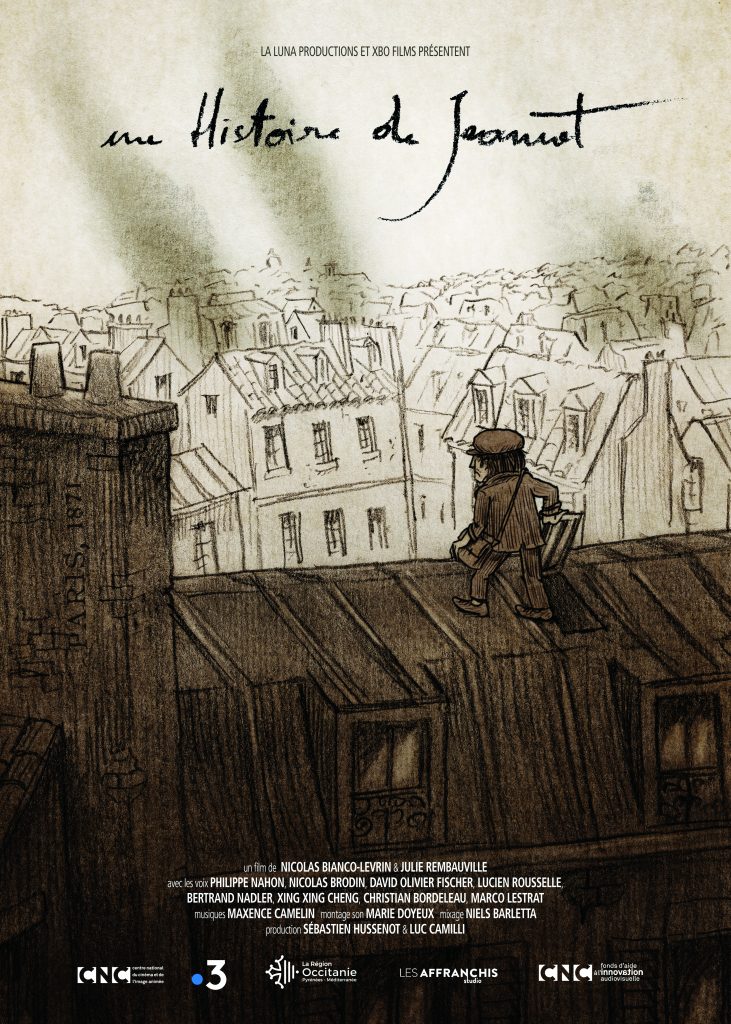 Both born in the Paris region, Julie Rembauville studied literature and audiovisual at the Sorbonne and Nicolas Bianco-Levrin studied applied arts at the Duperré school. They first published books for young people while animation offers itself to them as a ground for experimenting with four-handed narratives.
They self-produced their first films within their association Prototypes Associés, trying out all kinds of techniques before working with Sacrebleu productions for their project of series Kroak in 2009, adaptation of the albums of the same name. In 2012, Folimage and the NFB co-produce Merci mon chien (pre-purchase Canal +) whose script received the SACD prize at the MIFA in Annecy. La Luna productions then produced Il était trois fois, in 2015 as part of the Canal + collection “Dessine toujours !” then Jeannot’s story co-produced by XBO films in 2019 (pre-purchase France 3). Their latest film, Vielle Peau, won the festival grant/Auvergne-Rhône Alpes Cinéma at the MIFA Annecy in 2016 and is beginning its journey to festivals, alongside others of their very short films for young people, made in the spontaneity of the self-production house. In fifteen years, Julie and Nicolas have directed together more than together more than thirty short films distinguished in many international festivals.
After having organized the Prototype Video Festival dedicated to amateur films for more than ten years, they are working this year on the 5th edition of the 7 Petits cailloux festival, the short film festival for young people in Tinqueux, in the continuity of the numerous interventions and workshops they have always done with young audiences.

With the support of CNC, Région Occitanie. In collaboration with France Télévisions - France 3