My Tiger short film – 14’10 – 2022 SYNOPSIS Mr K works for a company that manufactures « Pastagel »,  a miraculous product which keeps your hair perfect all day long. Despite his efforts to look like everyone else, his hair refuses to be tamed. Deep down, is Mr K a little too bit rebellious, just like his […]

The Umbrella short film – 15’33 – 2022 SYNOPSIS The earth is eroded by an incessant rain, its matter collapses, nothing remains of the landscape except a long field and narrow pillars rising against an immense sky. On one of these islands a survivor stands motionless, clinging to his umbrella, his only weapon against the […]

The boy and the elephant 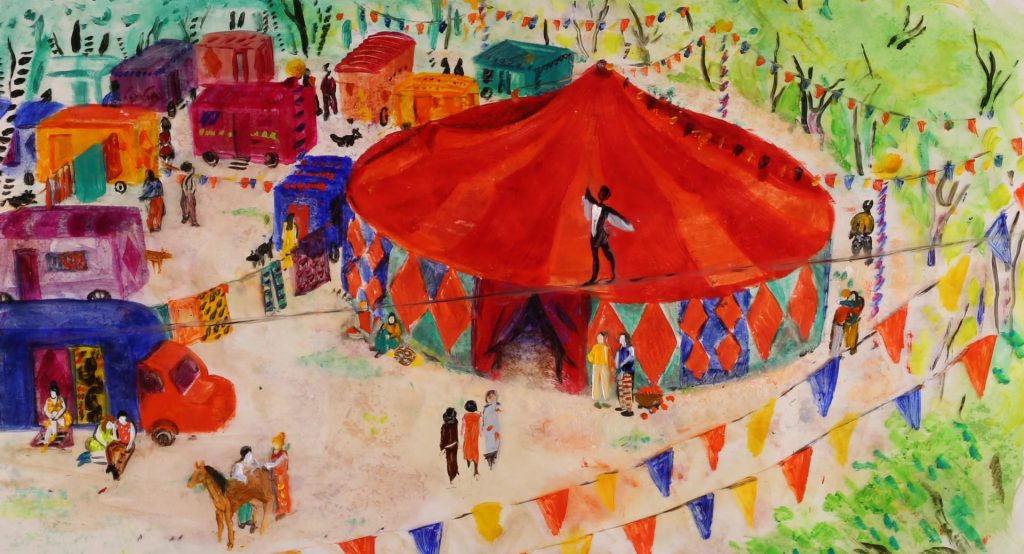 The crossing feature film – 77′ – 2019 SYNOPSIS A looted village, a family on the run and two children chased into exile… Kyona and Adriel flee their pursurers in search of a country with a more lenient regime. During a journey that takes them from childhood to adolescence, they cross a continent obsessed with […]

A peeble in the shoe

A peeble in the shoe short film – 11′ – 2020 SYNOPSIS A new student arrives in class. He is not a student like the others, he is a frog in a class of bunnies. DIRECTION Éric Montchaud SCRIPT Éric Montchaud, avec la participation de Cécile Polard PRODUCTION Xbo films & Nadasdy Films TECHNIQUE puppets, […]

The Hole short film – 12’36 – 2020 SYNOPSIS Set to music, the life of a child passes before our eyes. A very small boy is given a hat. He was given a hat so that he could assume his manly role. He’s a cowboy. He begins his life. A gunshot rings. He gets up, […]

The box short film – 11’07 – 2019 SYNOPSIS What is more ordinary than receiving a package in the mail ? « Yes but… ? And if… » Unfortunate words which lead Chloé to come to improbable hypotheses…Because if anxiety was a religion, Cholé would be its pope. DIRECTION Marie-Pierre Hauwelle SCRIPT Marie-Pierre Hauwelle avec […]

The Survival of the species

The Survival of the species TV pilot – 5′ – 2021 SYNOPSIS All that remains of humanity (and of the world that it knew), are robots and the “Museum of Man” which contains the talking head of Dr. De Wilde, an unlikely prophet, who is unaware of our species’ extinction. Using the depictions of humanity […]